For in Him All Things Were Created - Part 2 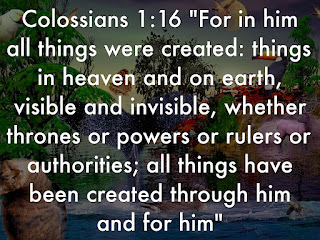 Colossians 1:16
For in him all things were created; things in heaven and earth, visible and invisible, whether thrones or powers or rulers or authorities; all things have been created through him and for him.

The following is the completion of Pastor Mike's address to his congregation, now swelled beyond the church's modest confines, all because of the actions of one Grey (Racer), True Squirrel of the Old Ones, and his undying love for young Davy, their Chosen One.  This excerpt comes from my second novel, Redemption, in the Adventures in The Glade series.  To read the beginning of Pastor Mike's sermon, scroll down and click on "Older Post."

"So this past Sunday's incident with the squirrel who was visible one moment and invisible the next made me reflect upon this very question:  If, indeed, as Paul tells us, 'all things have been created through him and for him,' why can't this include creatures we cannot see unless they, as the angel, Gabriel, manifested to Mary, choose to be seen?  Every single person who was in attendance last Sunday witnessed the same event.  It wasn't a handful of you, but every one of you who saw the same scenario played out.  I am reminded of the initial descent of the Holy Spirit upon the disciples at Pentecost.  Thousands saw the invisible become visible in the leaping tongues of flames, heralding the arrival of the Comforter and the true beginning of the Christian movement throughout the entire known world.

"Perhaps, then, the appearance of this mysterious squirrel in our midst was no mistake.  Perhaps, there are some of us in this church who need a wake-up call, a reassurance that even when we can't see God working in our lives, He is there all along.  And sometimes it takes a mystical moment of revelation to wonder again at the incomprehensible creation God has made for us to dwell in.  To become, as Jesus said, like little children in order to inherit the kingdom, to believe with child-like faith in the miracles, great and small, which surround us every day of our lives.

"At times, it may seem to us that God, too, is invisible, yet nothing could be further from the truth.  God has made Himself known through His only Son, Christ Jesus, who took on flesh and blood in this world, sacrificed Himself for the forgiveness of our sins, and promised eternal life to all who believe in Him.  Are you walking with Jesus today?  Have you committed your life to follow Him?  If you haven't, I invite you to prayerfully consider approaching this altar today.  Jesus is waiting, visibly and readily, for you to knock on His door and let him into your lives.  Let us pray silently as those who feel so moved by the Spirit to answer Jesus' invitation come forward."

Pastor Mike descended from the pulpit to stand at the altar rail as Grace softly played the tried and true hymn, "Just as I Am," on the piano.  Davy realized that Mike was smiling directly at him.  The boy met Racer's loving gaze and heard, "It's your time, Davy.  It's your time."

If you haven't already committed your life to Jesus, is it your time?  And if you have made that commitment, feel free to share in the comments how you were moved to that life-changing decision.

Prayer:  Father, we pray for all those who have yet to invite Your precious Son, Christ Jesus, into their lives.  Open their eyes to the salvation Your grace has to offer to them.  Turn the eyes of their hearts to behold You in Jesus, and welcome Him with open arms.  It is in Jesus' name, we pray.  Amen.
at February 19, 2016 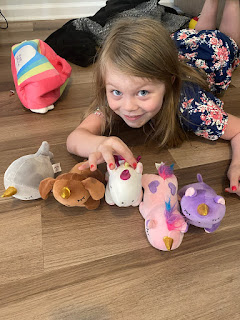