Ephesians 2:4-5
But because of his great love for us, God, who is rich in mercy, made us alive with Christ even when we were dead in transgressions - it is by grace you have been saved.

Today's devotion is an excerpt from my second novel of The Glade Series entitled Children in the Garden.  For those of you who have not read the books and are unfamiliar with the premise, let me bring you up to speed so the passage will be meaningful for you.  Here is the story synopsis:

Spending the summer at Grandpa Will's farm with his family is the last thing ten-year-old Davy Murray wants.  How will he survive without his friends, the pool, and his computer?  There isn't even a television at Grandpa's house!  Doesn't anyone see how miserable he will be?

But then, the miraculous happens!  Davy meets Grey, True Squirrel of the Old Ones, whom only he can see and hear.  Now Davy understands why Grandpa asked him to believe in the stories of the talking animals!  And, why Grandpa called him The Chosen One!  Oh, what a truly delightful summer this will be after all . . .

Here is the excerpt:

When the time arrived for the sermon, Davy noticed that Grey hopped down from his spot in the choir and scurried to the communion rail in order, Davy surmised, to be able to see the preacher's face as he delivered his message.  While Pastor Williams began rather gently in his sermon, it quickly and alarmingly transformed into a classic "hellfire and brimstone" tirade, the likes of which Davy had never heard.  Instead of working to convict him of man's fallen and sinful nature, it only served to scare him out of his wits.  He glanced over at Anna to discern her reaction but, luckily for her, she was dozing obliviously, leaned up against Jim's arm.

"Do you know about Hell?"  Pastor Williams gestured wildly, his face crimson with exertion, his voice a crash of thunder.  "It's where you burn forever for your sins.  Not all that call him "Lord, Lord" will enter the Pearly Gates.  No!  It's hell and damnation for all eternity!"

Desperate for reassurance, Davy tried to will Grey to meet his eyes.  The squirrel had a scowl on his face; his arms were folded and one foot tapped impatiently on the rail.  If he were capable of glaring, he was now doing so at this man shouting, gesticulating, accusing behind the pulpit.  Suddenly, as if he felt Davy's terrified thoughts, Grey turned and met his friend's fearful eyes.  Davy saw the squirrel's droop in sorrow as he read the expression on the boy's face, then, he suddenly straightened up and, flashing Davy that lop-sided smile, began to mimic the pastor's every move, even lip-syncing his words of doom.  At first, Davy was shocked.  Wasn't it irreverent to imitate a man of the cloth in such a fashion?  Then, as Grey's antics became as wild and gyrating as the pastor's, Davy couldn't help but smile at the comical efforts of his friend.  A rejuvenating wave of peace and comfort washed over him and he actually discovered that a smile had crept across his face.

"And, YOU, child!"  The pastor pointed right at Davy.  "Yes, you smile now, but unless you take heed and turn from your wicked ways, you will never enter the kingdom of heaven!  Everyone must turn and repent!"

Grey stopped dead in his tracks, his mouth agape.  Davy froze, imagining that every eye in that small and intimate place was on him.  He wished a trap door would open up and swallow him whole.  In his shame, he didn't dare look at Mom or Jim or the Fairchilds.  He was turned inside out and felt, to his horror, he might even get sick to his stomach.  It was then Grey did a most incredible, unimaginable thing.  He leapt off the rail and raced down the aisle of the church for the front doors.  As he flew by Davy, he smiled and said, "Watch!"

Within seconds, pandemonium ruled.  Women screamed and men hollered as a seemingly crazed, larger-than-life squirrel dashed headlong down the center aisle aiming right for the pastor.  Without a break in momentum, he leaped for the pastor's chest and knocked him soundly onto his hind parts.  Not an alarming inch away from the man's nose, Grey whispered, "Love and grace, my brother, love and grace."

Pastor Williams emitted a pitiful moan and passed out.  Before anyone could apprehend him, Grey dashed through the door he had entered with the choir and vanished, it seemed to all, into thin air.

Did you enjoy this excerpt?  I'd love your feedback in the comments section.

Will you pray with me?
Thank You, for Your great love, Father.  Even though we were still sinners, You sent Your precious Son, Christ Jesus, to die for our transgressions.  May we be ever mindful of and thankful for Your grace which has saved us.  Amen.

And Jesus went about all Galilee, teaching in their synagogues, preaching the gospel of the kingdom, and healing all kinds of sickness and... 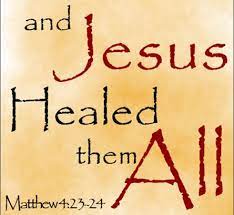