Luke 12:15
Then he said to them, "Watch out!  Be on your guard against all kinds of greed; life does not consist in an abundance of possessions."

I've always had a soft spot in my heart for squirrels.  I can't get enough of their amusing antics as they scurry through the yard, chase each other in the trees, and converge under the bird feeders to nab wayward seeds.  Is it any wonder, then, that a main character in my books, The Glade Series, is Grey, True Squirrel of the Old Ones?  Even if you are in that camp which views squirrels as bird seed hogs, attic squatters, and garden robbers, I urge you to let Grey change your point of view.  Or, at the least, temper your outlook.

Because of my affection for squirrels, I always spread extra bird seed on the ground to invite them to the banquet.  Why should they be excluded?  My motto?  Feed 'em, don't fight 'em!

One day, when my husband, Danny, returns from a trip to our local big box store, he brings a surprise.  "Look what I found for our squirrels," he beams. 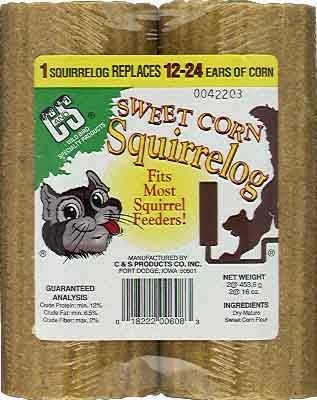 "I'll put the screw hook right on that pine near the feeders so we can easily watch from the deck or windows," Danny says.

I'm excited about this new addition to my squirrel friends' diets.  As Danny is installing the Sweet Corn Squirrellog, I wonder how long it will take the furry-tailed critters to discover it.

The squirrels are curious, yet cautious, wary even, of this odd-looking object near their feeding grounds.  At long last, one adventurous squirrels edges close enough to take a nibble.  When he does, he stays and stays and stays!  That is until another bold and hungry squirrel aggressively shoos him away so he can have his fill.

The swap and trade, confront and chase, continues until not one morsel is left.  All the while, however, the cob remains firmly in place because it's so securely affixed to the cork screw.  And, it seems, every squirrel who wishes to take a bite gets a chance.

"Well, they've eaten both corn cobs," I tell Danny.  "Since we don't have any more of these, is there something else squirrels like to eat that we could put out there to tide them over until we get to the store?"

Danny makes a quick internet search.  "Apples!  It says here that squirrels like them.  We have some, don't we?"

I waste no time fetching and washing an apple, and carrying it out to the corkscrew.  The fruit's pliable pulpiness offers no resistance as I push it onto the hook.  All set to go! 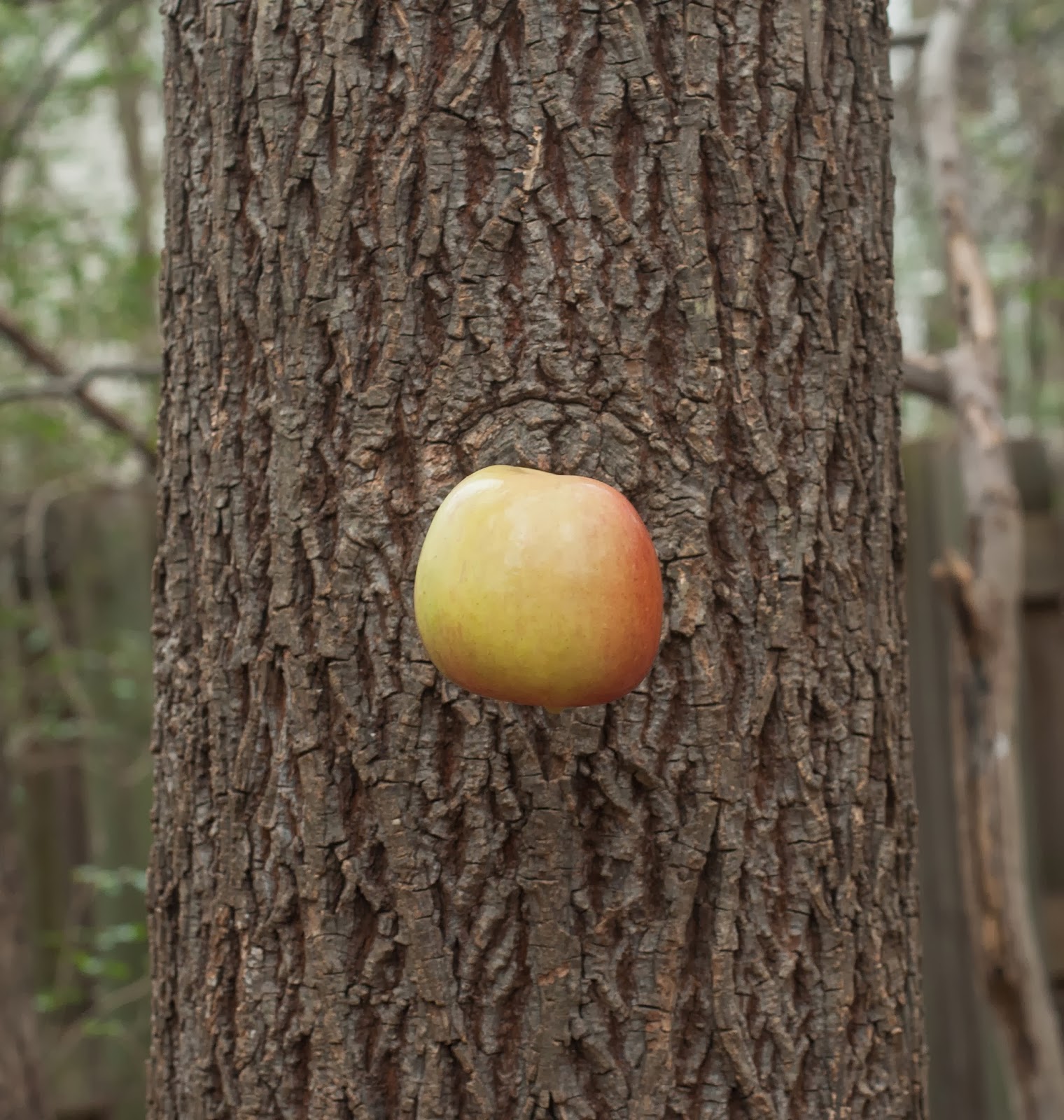 Do the squirrels like the apple?  Can we say - LOVE?  If we thought their sharing of the corn cob was competitive, we hadn't seen anything yet!  Every squirrel wants in on the action, but the one in immediate possession has no inclination to share.  Taking turns with the corn cob was one thing, but the apple ups the ante.

Before we know it, the squirrel-who-says-MINE-ALL-MINE yanks the remaining piece of apple off the corkscrew and heads for the trees.  Another squirrel, just as covetous, spies him, and the chase is on! 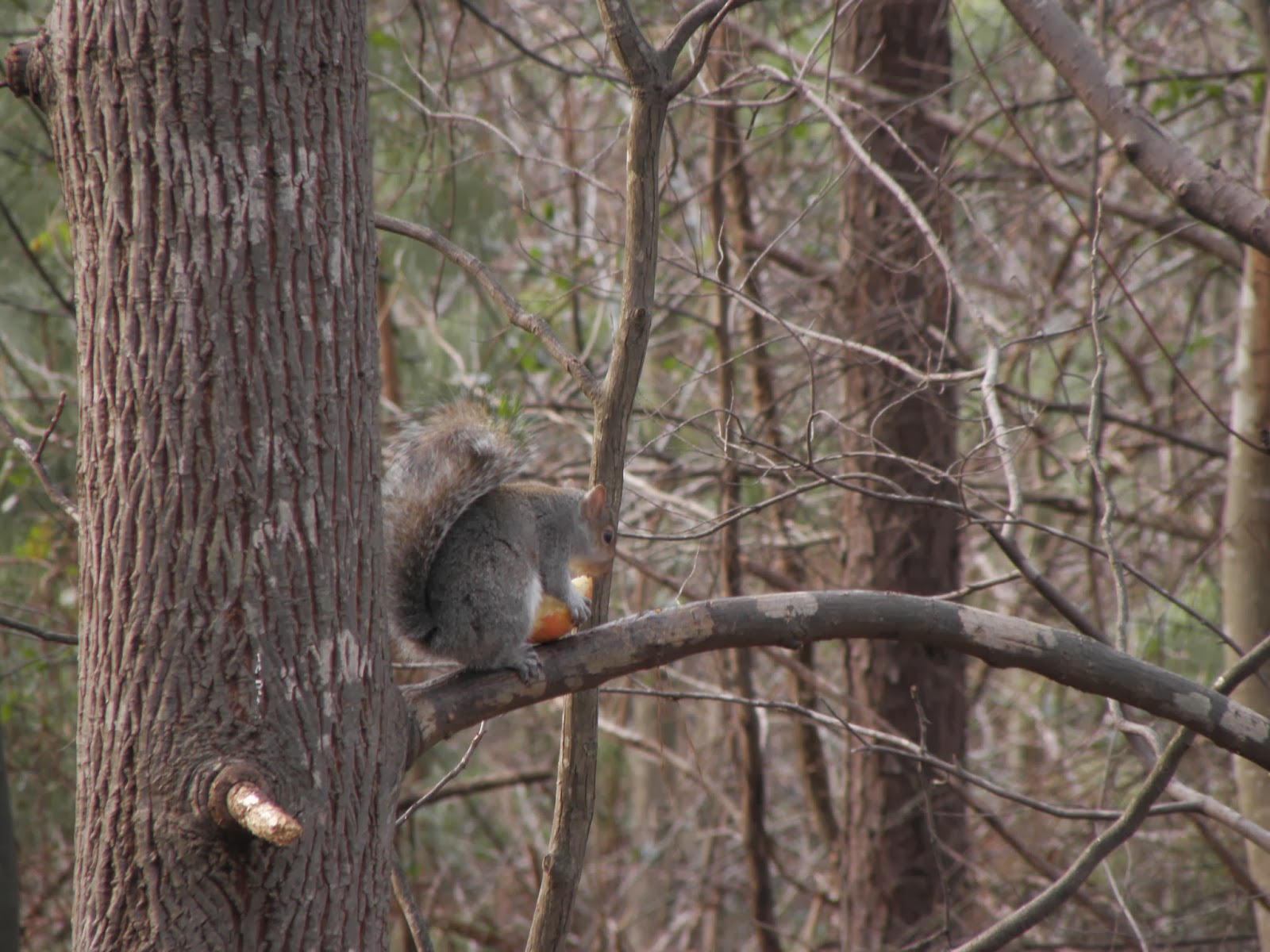 We look on as the drama unfolds in the branches above.  "I wonder how long it will be before that squirrel drops the apple?  With that mad dashing about, he can't possibly hold onto it forever, can he?"

THUD!  The relished remains of the juicy apple land on the forest floor.  Because of their immense and intense greed, both squirrels were denied the dining pleasure they could have experienced had they only been willing to share.

Are you missing out on opportunities to share with others?

Prayer:  Like the squirrels, Father, we too often take on that "mine-all-mine" mindset and miss out on the opportunities to share our good gifts with others.  May we remember Jesus' words that life doesn't consist in an abundance of possessions, but in the abundance of Your love.  Amen.
at February 21, 2014

Come to me, all you who labor and are heavy laden, and I will give you rest. ~Matthew 11:28 I cannot begin to convey the excitement and an... 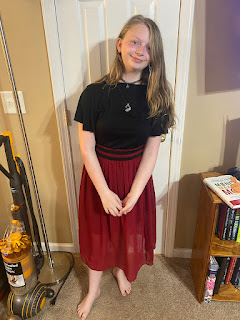