Talent on Loan From God 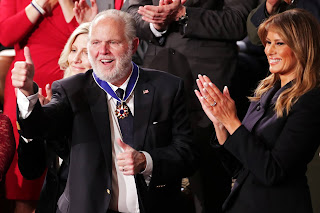 "After a long time the master of those servants returned and settled accounts with them.  The man who had received five bags of gold brought the other five. 'Master,' he said, 'you entrusted me with five bags of gold.  See, I have gained five more.'

"His master replied, 'Well done, good and faithful servant!  You have been faithful with a few things; I will put you in charge of many things.  Come and share your master's happiness.'" ~Matthew 25:19-21

Rush Limbaugh, the greatest talk show host of all time, has passed from this earthly veil.  My heart is broken, shattered by his loss for so many of us, the loyal millions of listeners, who depended on his uplifting messages, inspiration, and unapologetic love for America to see us through the good times and the bad.  I wonder how many tears the Lord is now busy catching in His eternal bottle?  I'm sure it's more than the grains of sand on the shore.

I know there are some of you reading this who either didn't like Rush, or were indifferent to his opinions and observations solidly planted in reality.  I feel so sorry that you missed out on hearing America's Anchorman communicating honest, clear, and yes, sometimes humorous messages to his audience.  Truth be told, I've learned more from Rush about both sides of the existential battle between conservatives and liberals than I could have possibly hoped to glean from any other media outlet.  He understood liberals think better than they do themselves, and he was never reluctant to call out so-called conservatives when he though they strayed from the founding principles of our country.

Rush was an equal opportunity offender, and I loved him for that!

Yes, there are a plethora of memorable stories out there about Rush's career, how he got started in the business, and how he persevered through the tough times to build his EIB (Excellence in Broadcasting) Network into a force to be reckoned with.  I don't choose to make this the focus point of my post today.  Instead, I want to highlight the time when I'm on the receiving end of Rush's generosity toward the members of his audience.

I would send Rush personal messages from time to time via his website, letting him know how much my granddaughter, Virginia, was enjoying his Rush Revere series, how the little grands loved their Liberty stuffed horse, and assuring him that he was in my thoughts and prayers for healing from the cancer.  Much to my surprise last summer, a package arrives at our door.  It's from the EIB Network!

I know I didn't order anything recently, so I'm overwhelmed with curiosity as to what this parcel contains.  When I open it, these gifts are revealed. 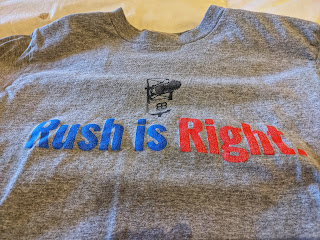 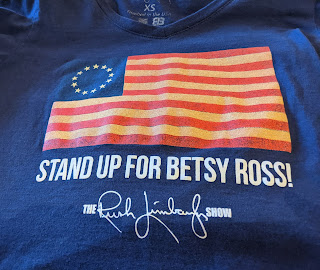 Three T-shirts that actually fit me, though how Rush and his dear wife, Kathryn, could have known is beyond me.  This commemorative photo of Rush wearing the Presidential Medal of Freedom awarded at President Trump's last State of the Union address. 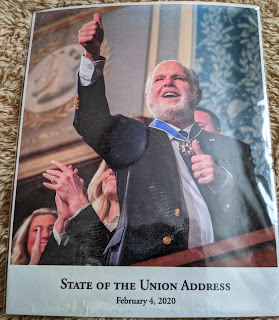 God has taken our dear Rush into His heavenly arms much too soon, but who are we to question God's timing?

And it gives me great comfort to know that Rush, especially in this last year of his cancer battle, was never shy to share that he had a personal relationship with Jesus.  One could tell that by his day to day demeanor on air, but it became crystal clear in 2020, and he wanted his listeners to know about Jesus' saving grace.

Yes, Rush, you were always right to acknowledge that your incomparable talent was on loan from God, reminding us that all our talents and gifts are the same.  You are now walking side by side with Jesus, and I can hear Him saying, "Well done, my good and faithful servant." 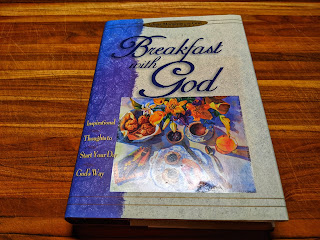